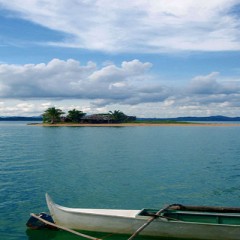 As an archipelagic country, the Philippines has a significant portion of its biodiversity hosted in marine and aquatic territories. This makes the marine protected area (MPA) system of especially significant value.

As an archipelagic country, the Philippines has a significant portion of its biodiversity hosted in marine and aquatic territories. This makes the marine protected area (MPA) system of especially significant value. To date, only less than 3% of the world’s oceans have been declared as protected areas. Progress in establishing marine protected areas worldwide has, however, been on an encouraging upward trend.  Click on the image for download links for more detailed maps. (Source: www.protectplanetocean.org)

In the global context, the MPA system is still in its early stages. Based on the latest statistics, coverage of marine protected areas  across the world’s oceans had just expanded to 2.8% as of October 2013 (it’s a small number, but nonetheless an encouraging improvement by 0.6% from 2012). 10% protection coverage is targeted by world governments by 2020.

Still, even within the established MPAs, very little evidence can be presented to date as far as successful management and protection is concerned. This is not an outright fault of the experts and authorities tasked with establishing and implementing conservation measures in the marine setting though; marine and coastal systems are simply complex in nature (more so than terrestrial areas) and therefore require better understanding in order to manage properly and effectively.

What can’t be denied is that humankind’s influence still bears significance in the effort to protect marine biodiversity, in the sense that human populations perpetuate key threats to marine ecosystems through continued resource exploitation (such as overfishing, bycatch, unsustainable fishing methods, et al.), poor governance, and socio-political uncertainties (such as territorial disputes).

MPAs  in the Philippines

The Philippines is home to a range of 400 to 500 marine protected areas – the most in Southeast Asia – which were mostly established by the local government. Currently, however, less than 50 of these sites are recognized as functional conservation areas. The DA's Bureau of Fisheries and Aquatic Resources maps out the 44 MPAs of the Philippines based on data as of April 2013 as shown below. (To view a summary of the details of the map, describing the location, type, and area covered by the MPAs shown, click here.) DA-BFAR’s map of the marine protected areas in the Philippines. Click on the image for a larger version. (Source: bfar.da.gov.ph)

The significant discrepancy in the numbers of effectively managed MPAs in the country is mostly attributed to poor governance and enforcement, the subsistence requirements of the immediate local communities (mostly poverty-influenced, as well), and inadequate financing and resource support.

The lack of a specific, comprehensive legal framework for MPA systems is also a glaring inadequacy for the marine biodiversity agenda of the Philippines. At present, marine resource management as a whole is based on an aggregation of existing laws such as the NIPAS Act of 1992 (RA No. 7586), the Philippine Fisheries Code of 1998 (RA No. 8550), and the Wildlife Resources Conservation and Protection Act of 2001, among others. A more specific legal mandate is viewed as an ideal instrument to streamline the establishment, implementation, and monitoring of effective marine protected areas in this country.

Where effective, however, certain implementations of the MPA system in the Philippines have proven notably successful, such as in the cases of the “no-take zone” of Sumilon Island in Cebu, the extensive seahorse protection measures of Jandayan Island in Bohol, and the abalone-based protection system of the Sagay Marine Reserve in Negros Occidental. In these three success stories, a high degree of involvement by the local community was a critical contributing factor. In light of this, there should be adequate institutional capacity on the part of concerned government bodies so that the necessary resources and services that can further build the capacity of the community itself may be sufficiently provided.